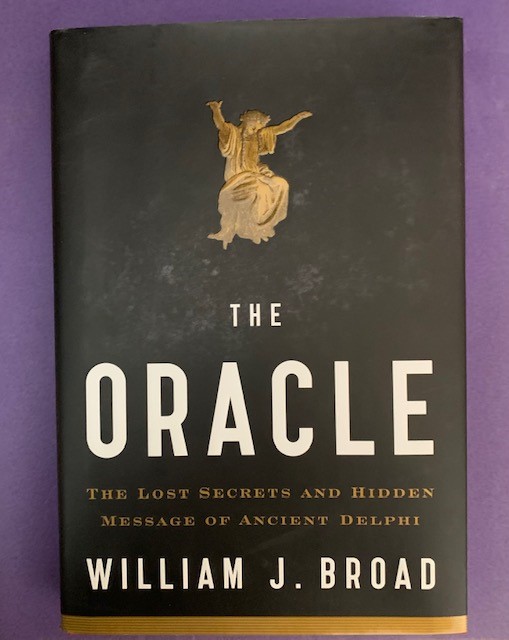 Bk: The ORACLE, The Lost Secrets and Hidden Message of Ancient Delphi by William J Broad

Do you find yourself fascinated by the Oracle at Delphi?  Drawn to such energy?  Do you wonder at the abilities to interpret dreams and how they have influenced history? Are you drawn to ancient Greece?  This is an engrossing read gathering historical evidence and accounts from Plutarch and others.

Of all the stories of ancient Greece, few capture the imagination as much as the Oracle of Delphi.  Human mistress of the great god Apollo, the Oracle had the power to enter into ecstatic union with Him and bring back His prophecies and counsel for all who came seeking answers. Residing in Apollo’s temple on the sacred slopes of Mount Parnassus in central Greece, the Oracle was consulted on matters large and small. Though the air of magic that surrounds her might cast her as a legend, the Oracle did in fact exist–and her visions caused her to become the single most influential figure in all of ancient Greece.

Pulitzer Prize-winning journalist and bestselling author William J Broad tells a modern-day detective story that blends history and science to describe how an enterprising team, working from clues scattered throughout the ancient literature, as well as the latest findings of geology, uncovered scientific evidence that at long last reveals the Oracle’s secret.  Into the dramatic account of that groundbreaking discovery Broad weaves the fascinating story of the ancient Oracle, as well as her surprising power to open a new phase in the modern debate between science and spirituality.